Well, after a month of being busy at work, dealing with the Feds to maintain certain privileges to fly the friendly skies, and the IRS, to stay out of jail to exercise those privileges, work on the Cougar has resumed!

The restoration of our Cougar started before Hunting American Muscle was launched, so I’ll be catching everyone up on the car and the work. We purchased the car in the Fall of 2014. Then the wife wanted a bigger house so we moved a couple of months later, so the real work didn’t start until the winter of 2015. The car is a 1967 Mercury Cougar Dan Gurney special and a Marti Report verified 1 of 1. Power disc brakes, an A code, 225 horsepower 289 and the famous C-4 automatic. Nowhere near a powerhouse, but a decent performer in the day. The Cougar, as most car people know,  was Mercury’s answer to the wildly popular Mustang. Introduced in 1967, it was designed to be more of a European sports car that was more luxurious with a longer and lower stance. The Cougar was stretched 3  longer inches in the back. Other than that, it shared the same uni-body as the Mustang, and just about everything else. Since everything is reproduced for the Mustang, it is pretty easy to get Cougar parts because of the crossovers.  So restoring the Cougar is almost as easy (easy, right) as the Mustang.

Our cougar is a 1967 that we located in Bloomington, Indiana, home of the Hurryin’ Hoosiers at Indiana University.  The guy that had was a musician and moving to Hollywood and had to sell it. We got it right. He bought it from the original owner in 2005 in Chicago. Before that the car sat in a garage for 24 years! An affidavit from the original owner matches the odometer at just over 37000 miles!  Lots of wax markings from the factory still exist, the data plate on the door is the original and the buck tag on the radiator support is there too. The car is complete and it was ready for restoration. 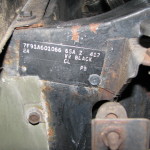 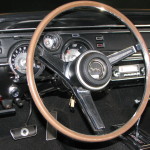 We got the car in the shop and got it on stands. I started on the rear suspension. Got the exhaust with the original ford muffler out of the way and then on to the shocks and springs. The shocks were the original Autolite units! There was no resistance on those shocks at all in either direction. Got the springs removed and lowered the rear end down. Don’t forget those parking brake cables. The rear axle is now at the other shop and is getting sandblasted. There was a lot of noise coming from the rear end so we purchased axle bearings Warrick Automotive, the local Napa parts store and had the bearings pressed on in their machine shop. The spring and shock mount plates were blasted in the cabinet and then sprayed with Eastwood rattle cans of Rust Encapsulator Gray for a primer over the bare metal and then the Eastwood Extreme Chassis Black in Satin for the topcoat. The axle housing will be with the Eastwood Extreme Chassis Black in Gloss for a little contrast.

The differential that came out of the axle was an open unit and carried 3.00 gears. That is a fine ratio, a little performance and ok on the gas mileage, but we are going for a little more performance. So we opted for a 4 pinion Traction-Loc rear end with a 3.55 ratio. All of it inside of a Ford factory extra rib 8-inch case with the stock 28 spline axles. That should help!