Well, after we got the car inside and started inspecting, one thing was for certain. We got a good car. The seller was honest about it and it did not disappoint. As we were unloading parts that were stacked in the interior we stumbled across a few items that got our interest. We ran across the assembly line buck tag, which is hard to find on any classic Mustang these days. The original Ownercard and Ownercard Metal Tag, original Consumer Information sheet, Owners Manual, and tons of other period paperwork examples that show the original provenance of the car. As we went on we foung the keys in the ignition and this is pretty cool: Ford has District Sales Offices. They are called DSO’s by Ford. The DSO is an item on the VIN tag. They are placed in the US, usually in the large cities, as I would think, based on population. More out east, less in the west, until California. Each car made is ordered or assigned a DSO. Well, the key tag that we found with our car was the original key tag from the DSO of Salt Lake City were the car was originally delivered to from the Dearborn, Michigan factory! 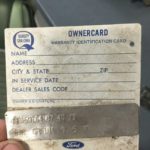 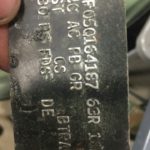 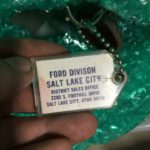 As we were digging through the paperwork box, we found the original owners name, the original Ford dealership that ordered and sold that car. Our car was ordered as a dealer demonstrator by Bob Bate, the owner of Bob Bate Ford, in Cascade, Idaho. After we found this out, Chris, the master mechanic of the HAM garage, looked up the the dealership and found that they were still in business. So, he called.

Chris called and a guy answered the phone.  It was Bob Bate. Junior.  Chris spoke and said that we had a car that was sold at the Bob Bate Dealership and wondered if we could get any more information.  So the Bob Junior throws it out there and says was it a 1972 Green Mach 1? Chris freaked! He’s like how’d ya know? Well, turns out he wondered about that car for a long time and went to tell the story.

He was 9 years old and remembers driving to the Salt Lake City DSO and getting into the back of the car and driving all of the way to Idaho! How cool is that? So, we have the total story from birth at the factory via the Marti report (details to follow when elite Marti is received) to its first life in the Idaho dealership.

The Q code Mach 1 was ordered as a dealer demo car from what we can tell at this point and then sold to one of the mechanics at the Bob Bate Ford Dealership. We have the hand written note from Bob Bate stating that the warranty was still in place at the time of the purchase! We have an excellent paper trail on the car and will post the photos of it.

More of the paper trail will be revealed with photos of the evidence. Right now (June 30) the car is going into paint. We have retained all original exterior sheet metal except for one lower quarter patch and a front valance.  Pictures will be coming soon that will show the quality of this car, the nut and bolt restoration, and the paint, as soon as it is out! Final assembly will be done by the end of August and the car will be for sale!